Over recent years, the law enforcement offices throughout the San Diego area have ramped up their checkpoint program designed to reduce driving under the influence (DUI) in the area. A DUI checkpoint is essentially a roadblock that allows police to randomly check drivers for signs of intoxication. On average, a single DUI checkpoint can yield between 3 and 20 DUI arrests in a single night. 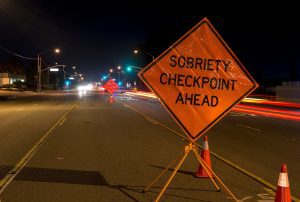 If you drive at night around the San Diego, CA area, you are likely to encounter a checkpoint eventually. Local police tend to arrange DUI checkpoints at areas with higher-than-average DUI rates and places most likely to catch impaired drivers, such as roads that connect busy metropolitan areas to residential neighborhoods.

How Does a DUI Checkpoint Work?

A DUI checkpoint is a controlled flow of traffic, and as each vehicle passes through the checkpoint, the officers managing the checkpoint will look for signs of intoxication. If a police officer can establish probable cause that a driver is under the influence of drugs or alcohol, they will conduct an arrest for DUI.

Typically, the police have to establish probable cause to conduct a traffic stop for suspected DUI, such as erratic driving or a broken taillight. Since DUI checkpoints effectively allow them to circumvent this requirement, the police must adhere closely to the regulations for DUI checkpoints.

If you are arrested at a DUI checkpoint and charged with DUI, you could face a wide range of penalties depending on the severity of your charge. In California, DUI can qualify for a misdemeanor or felony status depending on the unique details of the case. The potential penalties for conviction include:

If you or a loved one have been charged with DUI in San Diego after passing through a DUI checkpoint, it’s essential to know how a DUI defense attorney can help your situation.

It’s natural to have concerns about the legality of these checkpoints, and it may seem unfair to face DUI charges because you were stopped at a checkpoint. Regardless of how you were arrested for DUI in San Diego, it is essential to acknowledge the value of legal counsel as you navigate your case.

Zentz & Zentz have years of experience providing defense counsel to individuals charged with DUI in San Diego, CA. The following are some of the most common questions we hear regarding DUI checkpoints in the area.

A: DUI checkpoints are legal under both the U.S. Constitution and the California State Constitution. However, the police managing a DUI checkpoint in San Diego must meet the aforementioned criteria to ensure the checkpoint does not intrude on the rights of drivers.

Q: What Are Your Rights at a DUI Checkpoint?

A: A DUI checkpoint is not the same as a traffic stop. Drivers are expected to answer basic questions from the checkpoint officer before they go on their way, but they are under no obligation to do so. A DUI checkpoint does not negate a driver’s rights, and the police must follow applicable laws and procedures when managing a DUI checkpoint.

Q: Is It Legal to Turn Around at a DUI Checkpoint?

A: Many DUI checkpoints are arranged in visible locations, so a driver may change direction before proceeding to the checkpoint. As long as doing so does not violate any traffic laws, it is perfectly legal for a driver to change direction to avoid a checkpoint. However, if they do so in an erratic manner that violates traffic laws, this could serve as justification for an officer at the checkpoint to follow the driver and conduct a traffic stop for suspected DUI. Police cannot conduct traffic stops simply because a driver chose to avoid a DUI checkpoint.

Q: Can I Remain Silent at a DUI Checkpoint?

Zentz & Zentz have years of experience guiding clients through the most challenging DUI cases, including those resulting from DUI checkpoint arrests. If you believe the police mismanaged the DUI checkpoint or failed to properly establish probable cause to conduct an arrest, we can help you address the situation. Contact us today for more information about how we can assist you with your DUI defense.